“Growing these munchkins was the hardest thing I’ve ever done,” 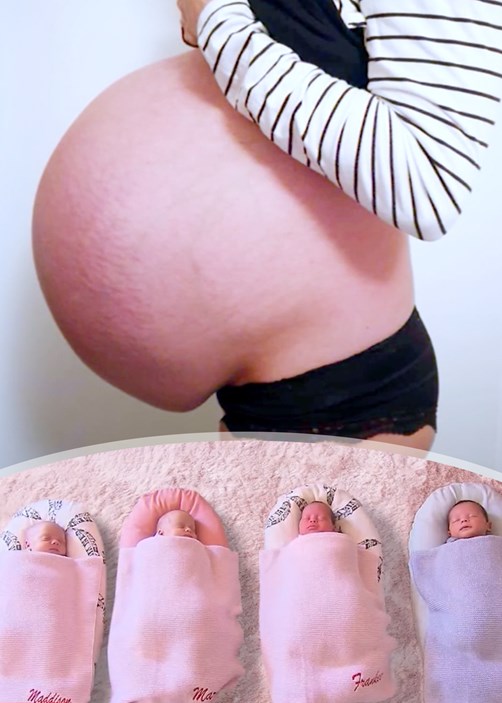 “Growing these munchkins was the hardest thing I’ve ever done,”

In Australia you've got more chance of becoming an instant millionaire in the lottery than becoming the parents of quadruplets! With just a one in 11-15 million chance, Western Australian couple, Natalee and Kahn sure got lucky!

Tonight, on A Current Affair, they're sitting to chat about the incredible journey that led them to going from a family of three to a family of seven overnight when they welcome's their "miracle quadruplets" amid the global pandemic.

The West Australian couple got more than they bargained for when they were trying to fall pregnant and give their two-year-old daughter Kiana a sibling.

"Twins run in my family so I was happy with two, but not one part of me ever thought we would end up with four," says Natalee.

No one would question having quadruplets is stressful, but what about having quads during a global pandemic?

The couple were enjoying one last holiday to the Cook Islands via New Zealand when the coronavirus crisis spun out of control, and borders shut down around the globe, stranding them in New Zealand for a short time and forcing them into isolation when they did finally manage to get home.

"Twins run in my family so I was happy with two, but not one part of me ever thought we would end up with four,". Image: Channel Nine.

As for parenting five newborns, in the A Current Affair television exclusive, the young couple say they’re taking it all in their stride.

“I look at our daughter, and if these four give us the love she gives us, it's going to be amazing”, says Natalee.

Watch the full story on A Current Affair, Channel Nine at 7pm tonight.

It's a boy!: Alec and Hilaria Baldwin have welcomed their fi…

8000 parents have voted and these are the best baby products…

Myth Busting: How to Alleviate Asthma in Children

15 delicious desserts you never knew you could make in your …

EXCLUSIVE: Andy Griffiths shares how he went from singer in …

Aldi's $99 Dyson-like stick vacuum has shoppers in a frenzy